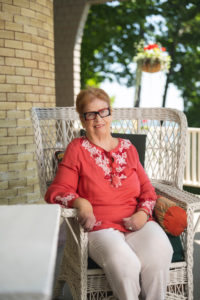 Mary Hulings Rice, age 80, of Bayfield, passed away Wednesday, December 2, 2020, at her residence.  She was born Mary Elizabeth Hulings July 22, 1940, in Stillwater, the daughter of Bill and Betty (Andersen) Hulings.

She attended Stillwater High School, graduating in 1958.  She then graduated from Carleton College (Northfield, MN) in 1962.  While attending Carleton she met John Rice and they were married in 1963.  She worked as a secretary in downtown Minneapolis until John, who was an officer in the US Army was sent to Germany.  She and John lived in Baumholder, Germany from 1967-69, where their first child was born, and then Warrington, England from 1969-70, where their second child was born.  Mary and John returned to live in St. Paul, MN in 1970 until they were divorced in 1979.  Divorce was relative to Mary, and she considered John, his second wife Barbara, and their daughter, immediate family.

In 1973, with her sister Martha Kaemmer and college friend Steve Soderman, Mary opened Thrice, a cookware store on Grand Avenue in St. Paul, which soon took over the neighboring storefront and became a cooking school.  She, with her friend Carole Howe, a fellow Grand Avenue business owner, conspired to create the yearly celebration known as Grand Old Day.

Mary moved to Bayfield, WI in 1980.  She had been traveling to Bayfield for the summers since she was a small child when her father purchased the Shaw farm on Sand Island.  Prior to moving to Bayfield Mary opened a gift shop called The Rear Admiral.  Mary opened Maggie’s restaurant in 1980, where the pink flamingo was the mascot and became one of Mary’s most identifiable symbols.  Mary announced her plan to close Maggie’s on October 20, 2020.  She had several other restaurants and food related businesses over the years in Bayfield including Mainstreet Maggie’s, Bates Bar, and The Egg Toss.

In 1983, Mary purchased The Clubhouse restaurant on Madeline Island, which became a well renowned destination in foodie communities.  She closed The Clubhouse in 1999 to open an even better and more adored eating experience, Wild Rice Restaurant, in the woods on the shore of Lake Superior south of Bayfield.  Wild Rice closed its doors in 2017, but the experience she began lives on in the form of Wild Rice Retreat, with new owners.

She had a hand in starting so many other businesses: Big Top Chautauqua, Madeline Island Music Camp, CORE Community Resources, to name a few.  And she served on the boards of many organizations including Northland College and the Madeline Island Ferry Line.  She also encouraged the development of nonprofits such as Apostle Islands Historic Preservation Conservation and Apostle Islands Area Community Fund.

The “Queen of Bayfield”, Mary was an impresario extraordinaire who organized countless dinners, parties, events, mystery tours and celebrations year round.  She was founder of the Blue Moon Ball, Northern New Years, the Fun Hogs, the Rump Committee and F.U.N. (Flamingos Up North), the umbrella for her many restaurants.

She led tours for family and friends to exotic places, art museums, vineyards and the finest restaurants around the world—and to her beloved Rasina in Umbria, Italy, and Hope Town, Bahamas, where she became a central figure in the community.  Each trip was planned down to the last detail to make sure all could experience it fully.

In Bayfield, her home was open to everyone—no knocking on the door, just walk in—everyone, that is, except tourists who would wander in thinking her Queen Anne house was a B&B.  She would hold court from her chair in the solarium, where she would be planning the next occasion to gather friends together.

Mary touched many lives with her unlimited generosity while demanding excellence from those organizations and people she supported.  She was discerning and strategic in her philanthropy yet immediately responded to emergency needs in her community, no matter the cause.  Her giving wasn’t encumbered by her ego; she truly seemed fine with providing people a place to start and then letting them run with it.

Though she was often a “larger than life” character, Mary was also a gifted artist—watercolors her specialty—and a beautiful singer in choirs and at Sunday Church on Sand Island.  She had a gift for storytelling and story making experiences were guaranteed with Mary.  While she loved the fanfare and notoriety that came with being the “Queen”, she also felt a deep responsibility for Bayfield and it’s welfare.

She loved to read, a book a night sometimes.  Her vocabulary was vast and vulgar.  She had wit that didn’t quit, and creativity without limit.  She was a list maker and a problem solver.

She was preceded in death by her parents; a sister, Martha Kaemmer; a best friend, Karlyn Holman; and three Sand Island soul mates, Warren, Peter, and Tom Jensch.

HRK Foundation is a family foundation defined by quiet leadership and philanthropy.
About Us